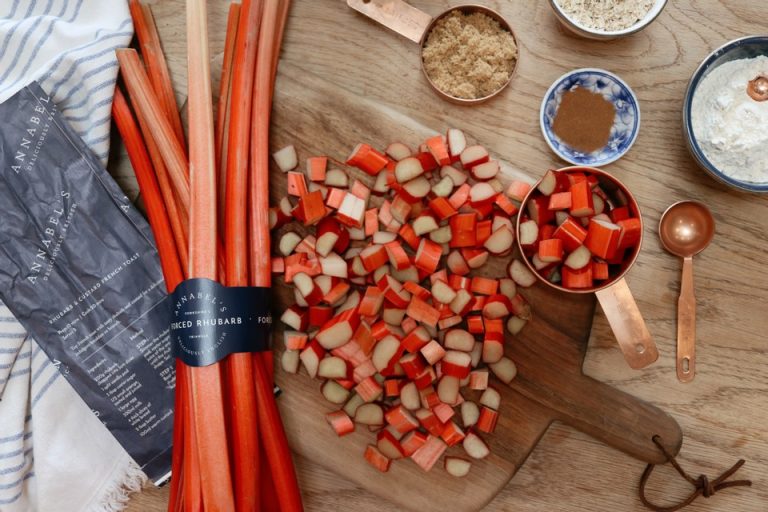 Forced rhubarb is a Yorkshire Delicacy with a rich history, and it has been part of our Annabel’s Deliciously British product range for a year. Pinker, sweeter, and more tender than outdoor grown varieties, Yorkshire forced rhubarb is incredibly versatile.

What is Forced Rhubarb?

As rhubarb originates from Siberia, it thrives in cold, wet conditions and soil that is rich in Nitrogen. Yorkshire has all three of these, providing the perfect growing conditions!

When grown outside, rhubarb is in season during the summer months. Forcing rhubarb means it can be available earlier, between January and March. This growing technique also preserves the rich pink colour, and fresh, sweet taste, so that the rhubarb isn’t too tart.

The forcing sheds are lit only by candlelight so the rhubarb grows quickly in search of light, producing the longer, thinner stems characteristic of forced rhubarb. Once matured, the stems are then carefully harvested via candlelight which prevents them from turning green.

The result? Very pink, tender, and sweet rhubarb that requires 40% less sugar to be used when cooking with it!

Forcing rhubarb in Yorkshire dates back to 1877. There was once an abundance of growers,  which has now reduced to around a dozen within Yorkshire’s Rhubarb Triangle – a nine-square-mile area between Wakefield, Morley and Rothwell.

This area is now protected, and Yorkshire Forced Rhubarb got awarded PDO (Protected Designation of Origin) status in 2010. Just like that of Parma Ham, Feta Cheese and Champagne.

Annabel follows in the footsteps of her grandfather Edmund Makin and is now working alongside specialist growers to produce forced rhubarb. The rhubarb first became part of the Annabel’s Deliciously British range in 2021 and can also be found year-round in our Rhuberry Conserve and Rhubarb & Mango Chutney.

How can you use Forced Rhubarb?

Rhubarb is a versatile fruit and is used within a variety of different dishes and bakes. From a rhubarb compote in yoghurt to a delicious ingredient in smoothies or a flavourful gin. Here are some of our recipes:

If you use Annabel’s Deliciously British Forced Rhubarb, make sure to tag us on social media so we can see the results!

Our forced rhubarb is available between the months of January, February and March. You can buy it from the following stockists and wholesalers: